In order to make this clearer, let’s look at each Teacher in turn, making the attempt to grasp as vividly as possible these four aspects for each of them. And so first we turn our gaze to Rudolf Steiner.

Let’s recall that the progressive unfolding of the inner lives of the Great Teachers has a certain relationship to the sequence of the Major Arcana:  The Magician (Sun), The High Priestess (Saturn), The Empress (Moon), The Emperor (Jupiter), etc. Therefore, we should be able to find in the inner life of Rudolf Steiner something representative of the spiritual activity that is The Magician. What is this spiritual activity? The Magician is Mysticism. He reveals to us the nature of Intuition; of Union with the Divine. This Intuition and Union is so immediate, and so pure, that it is unmediated by the reflection of thought or discursive thinking. It is pure, living, spiritual experience that only subsequently can be gathered into conscious thought (through the spiritual activity of The High Priestess, Gnosis).

The progressive teachings given by the Great Teachers do not follow the sequence of development laid out by the Major Arcana. Rather, this second level of activity on the part of the Teachers is expressed through the sequence of Cosmic Evolution, from Ancient Saturn to future Venus. Translated into the language of the Tarot, this sequence is The High Priestess (Saturn), The Magician (Sun), The Empress (Moon), The Chariot (Mars), The Pope (Mercury), and The Lover (Venus). Can we find in the teaching of Rudolf Steiner a quality related to that of The High Priestess, of Saturn?

The quality of the High Priestess is that of completely accurate reflection, like a still lake reflecting the sky. It is the utter stillness of the lower personality which enables it to clearly bring to consciousness, as well as communicate, the reality of the intuitive experience portrayed for us by the Arcanum of the Magician. Rudolf Steiner, more than any other human being, possessed the ability to impartially translate into human language the realities of the higher worlds. To the same degree as his impartiality (the silencing of the lower personality), Rudolf Steiner possessed a thoroughness and accuracy in reporting spiritual realities, one thus far unmatched by any other. 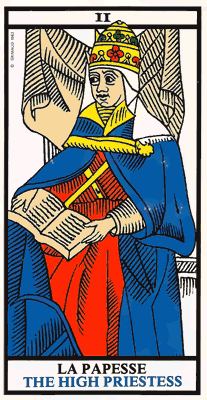 Now we come to the third level of activity of Rudolf Steiner:  his deeds. This particular realm of Steiner’s activity has been discussed from one angle in my prior articles on the 7 Miracles; now we will investigate it from another. Let’s remember that the path of Sacred Magic accomplished by the Great Teachers follows the path of the Healing Miracles of Christ through the chakras:  Moon, Venus, Mercury, Sun, etc. Translated into the imagery of the Tarot, this gives us:  The Empress (Moon), The Lover (Venus), The Pope (Mercury), The Magician (Sun), The Chariot (Mars), The Emperor (Jupiter), The High Priestess (Saturn). How were Rudolf Steiner’s deeds related to the Empress?

The Empress is the primary representative of Sacred Magic among the Major Arcana of the Tarot. Just as Rudolf Steiner was the archetypal mystic in his inner life and the archetypal gnostic in his teaching, he was also the archetypal mage in his life of will, his deeds. It seems that over the course of the last 20 years of his life (beginning particularly in 1907), every area of human endeavor was touched by this man and infused with the life of the Spirit. Architecture, painting, eurythmy, sculpture, speech, medicine, agriculture, pedagogy—each and every one of these areas became the platform upon which Sacred Magic could be performed via the agency of Rudolf Steiner.

In the Lord’s Prayer Course, Valentin Tomberg makes the following correspondences between the 7 Arts and the chakras:

The last of these, Drama, is meant in the Wagnerian sense, in which Drama is the synthesis of all of the preceding Arts. We can see that in the life of Rudolf Steiner, the attempt was made and the seed was planted for the archetypal form of Mystery Drama, in which the union of all of the Arts with the Spirit is realized.

If we now look at the last realm of activity of Rudolf Steiner, we come to his legacy and his effect on his students. The development of this last realm across the activity of the Great Teachers follows the path of the chakras from above to below, beginning with the Brow Chakra, the Jupiter Chakra. When translated into the language of the Tarot, this gives us the Hermetic correspondence of:  The Emperor (Jupiter), The Chariot (Mars), The Magician (Sun), The Pope (Mercury), The Lover (Venus), The Empress (Moon), The High Priestess (Saturn).

This sequence presents to us a different way of working with the Stages of the Passion taken by Christ. Rather than beginning with Crown=The Washing of the Feet and ending with The Moon=Resurrection, we have a sequence which integrates the reality of the descent to the Mother in Shambhala, which is only becoming clear to humanity in the present age:

Heart = Bearing of the Cross

Root = Descent to Shambhala (reunion with the Mother)

Crown = Resurrection/Ascension (reunion with the Father)

What is significant in this sequence is that it begins in the Brow Chakra, where the human being is alone with their own effort (“My God, My God, why hast Thou forsaken me?”). And this was the effect intended by Rudolf Steiner:  to encourage the student of spiritual science to strive upwards into the spiritual world by dint of an unceasing effort of the transformation of thinking, suffused with equanimity and patience. 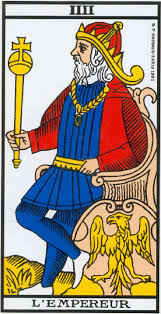 Within the Major Arcana, Jupiter is revealed to us through the Arcanum of the Emperor. He is the representative amongst the Arcana of Hermeticism. What is Hermeticism? It is the synthesis, within a perennial philosophy, of all knowledge and experience. A perennial philosophy, i.e. a living Tradition; while it ever strives to be all encompassing, it is also an organism in development. Rather than a fixed philosophical system, it offers a way of approaching the world to discover Truth. It forms a spiral, not a closed circle. Above all, it follows the Hermetic axiom, “As above, so below,” seeking the correspondence between the spiritual above and the material below. This was the enormous legacy left by Rudolf Steiner. More than any other teacher, he has left us with a synthetic, all encompassing world-view, one that (ideally) is a living activity in meeting the spiritual and material worlds rather than a new set of extremely abstract dogma (although this is its shadow side). It is in the wrestling with the content of Anthroposophy, in our active engagement both with the inner path laid out by Rudolf Steiner as well as the outer endeavors initiated by him that we find ourselves guided to the redemption of the Brow Chakra. In light of the Scourging, this is fundamentally the inner exercise of resolving polarities of left and right, of above and below, via the ultimate Center which is Christ.

And now we can understand more clearly why and how Rudolf Steiner accomplished such a miraculous amount in one lifetime. The four levels of his activity are summed up in the first four Major Arcana of the Tarot:  The Magician, The High Priestess, The Empress, The Emperor; or Mysticism, Gnosis, Sacred Magic, Hermeticism. These four Arcana comprise and express to us the ineffable name of God:  YHVH, Yod He Vau He. Rudolf Steiner’s life and destiny, then, were a perfect expression of the ineffable name of God, of Yahweh. Considering Rudolf Steiner’s karmic background as the individuality Moses, this is a humbling and awe-inspiring reality to ponder. It is no wonder, then, that in him we have seen the most comprehensive and inspiring spiritual teacher of the modern age:  he bears the very Name of God as his garment.